Recently I was asked to give a date for the invention of the lever harp. This is actually pretty hard to do precisely but I think we can go back as far as the eighteenth-century hook harp to find a forerunner to the type of lever harp we play now.

The hook harp followed on from other experiments in improving the chromatic ability of the harp. Earlier harp makers had built harps with a double or triple row of strings and even cross strung harps to create greater chromatic possibilities for harp players. The main issue with these instruments was that they were complex to play and difficult to tune. They were also expensive to make and maintain even though it was possible to play a full range of natural, sharp and flat notes.

Nevertheless, in the Baroque era the triple harp became quite popular and Handel even wrote his famous Harp Concerto in B flat for this instrument. There were triple harps played at Henry VIIIs court in the sixteenth century and the Welsh have continued a tradition of triple harp playing right up to the present day. Harps with a single row of strings, however, have endured more widely and for many musicians this is their preferred instrument. The persistent problem harp players have had to face though is how to deal with the increasingly chromatic nature of musical taste without having to double or triple the number of string we have!

The hook harp, with a single row of strings and U shaped ‘hooks’ fastened to the neck of the instrument, emerged as an attempt to solve the need to change the pitch of notes while playing. Invented about 1660 by harp makers from the Austrian Tyrol region, the metal levers or ‘hooks’ shortened the length of an adjacent string raising the pitch one semitone just like a modern lever.

The main draw back with the hooks was that they required the player to have a free hand to move them, usually the left. This is no different to lever harps today but the hooks were much more unwieldy. Moving them into place was difficult to achieve quickly and efficiently. They also shifted the alignment of the string considerably making it even more difficult for the harp player to perform with accuracy and good sound production.

Interestingly, the hook harp did not immediately prompt innovation in the hooks themselves as they acted against the string but in a mechanism for moving them. As the hooks had to be operated by hand, the Bavarian harp maker Georg Hochbrucker came up with the idea to attach pedals to move them instead. This early pedal operated hook harp was the precursor of later pedal harps.

From about 1720 when Hochbrucker started making his pedal harps, the main focus of harp makers was on the improvement of the pedal harp, rather than the pursuit of a better lever harp mechanism. It wasn’t until the Irish harp maker John Egan started making his Portable Irish Harps at the beginning of the nineteenth century that lever harps like the ones we play today were made.

With the patronage of the Irish Harp Society and later King George IV, Egan was able to experiment and develop the chromatic mechanisms of both pedal and Irish harps. He offered his customers a range of different types of instruments including a small harp on which he replaced the ‘hooks’ of earlier instruments with ‘blades’. Egan began making these harps during the British Regency period from about 1818 onwards and they were sold to customers throughout Britain, even making their way to Australia. Egan’s harps inspired other harp makers, including the American Melville Clark who made the very popular Clark Irish Harp, and ensured the continued evolution of and enthusiasm for the small folk harp we see today.

Recently I visited harp maker Bob Ballinger outside Melbourne. Bob invited me to see his new lathe on which he was making the front pillars of a batch of his latest lever harps. Little did I know that I was in for a real treat! After a life time of work as an industrial steam engine and steam turbine driver, Bob has the amazing ability to make almost anything from wood or metal. He also has a fascination with industrial history and the ‘old’ trade skills and crafts. When I visited Bob’s workshop I was delighted to find that the new lathe was being powered by a huge old steam engine fueled by a wood furnace. The steam plant runs belts that turn the lathe but not just any old lathe. No ….. Bob’s ‘new’ lathe in fact dates from the second half of the nineteenth century and was originally displayed in one of the Crystal Palace Exhibits in England after the Palace was moved to Sydenham Hill in 1852. Initially built for the 1851 Great Exhibition in Hyde Park, London, the Crystal Palace building was dismantled and reassembled in Sydenham Hill so that exhibits could continue to be accessed up until the early twentieth century. Bob’s lathe is an example of the latest metal turning technology of its time built by Henry Milnes of Bradford and a prototype of a type of lathe that the Milnes company later put into production.

Bob’s harps have a rich resonant sound and he puts an enormous amount of care and thought into their production. Bob not only restored the lathe so he could use it to make harps but he also restored the steam plant that powers it, which he named The Infant Hercules. Both are a testament to his incredible engineering skills. How his Crystal Palace lathe came to Australia is a story that I am sure Bob will happily tell you and a lot more history besides. How many harps are made in the world with steam technology – well I think that would be almost none!! Here are some photos of Bob turning the front pillar of a harp, his steam plant and the Crystal Palace lathe: 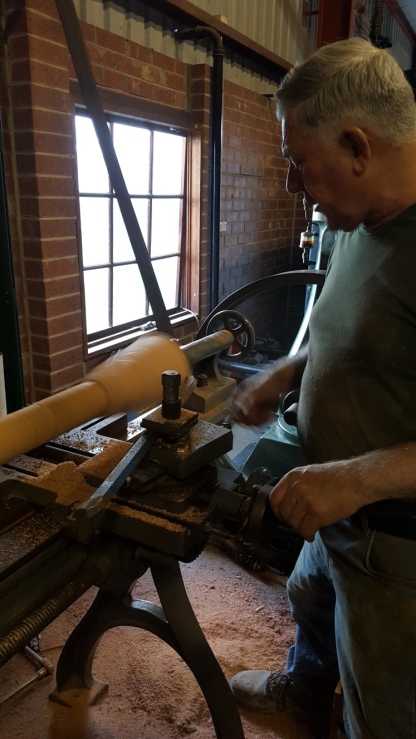 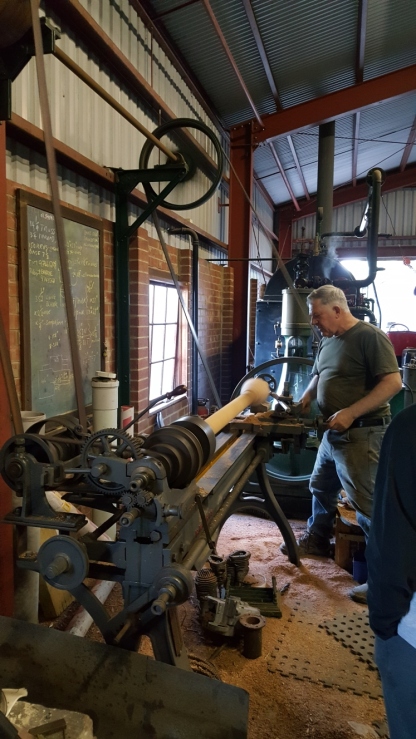 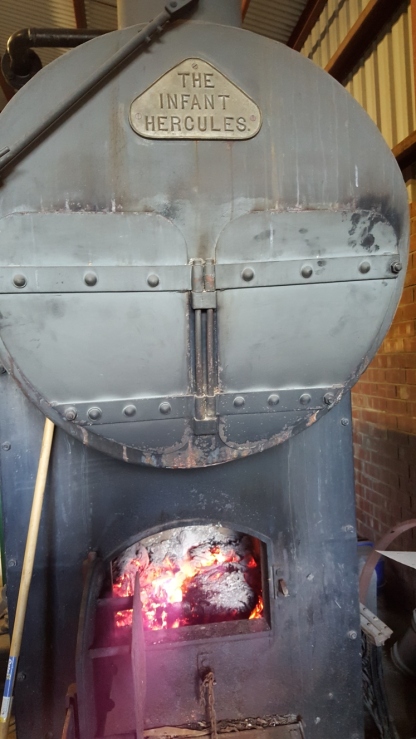